The Greatest Christmas Song Ever! 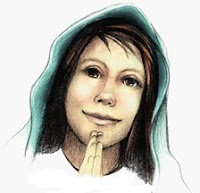 With only a few days left until Christmas, we have a Bible lesson which gives us what I like to call, "The Greatest Christmas Song Ever!" The Bible tells us that after the angel Gabriel appeared to Mary and told her that she would be the mother of Jesus, the Son of God, she went to see her cousin, Elizabeth.

As soon as Elizabeth saw Mary, she gave a glad cry and said to her, "God has blessed you above all women, and your child is blessed. You are blessed because you believed that the Lord would do what he said he would do."

Mary was filled with joy and began to offer up praise to God. We call this The Magnificat or "Mary's Song of Praise."

"My soul glorifies the Lord
and my spirit rejoices in God my Savior,
for he has been mindful
of the humble state of his servant.
From now on all generations will call me blessed
for the Mighty One has done great things for me—
holy is his name."

How beautiful! Mary, soon to be the mother of God's Son, giving praise to God because he has chosen her to bring his Son into the world. That is why I call it "The Greatest Christmas Song Ever."

God, our Heavenly Father, no matter what our favorite song may be, let it be a song of praise for your wonderful gift of love -- Jesus Christ, our Lord, in whose name we pray. Amen.
Posted by Sermons4Kids at 8:53 AM 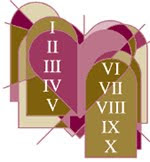 I taught school for many years. I think that every classroom I ever entered had a list of rules hanging on the wall. Even though there might have been some slight differences, most of them said pretty much the same thing. You can probably guess most of the rules. They usually said things like:
If you were to ask me which classroom rule is most important, I know what I would say. I would say that the most important rule is to respect and obey your teacher and the second is very much like it -- be kind and show respect for your fellow students. If the students would just follow those two rules, there really wouldn't be a need for any more.

The religious leaders of Jesus' day liked to sit around and discuss the law. They especially liked to ask Jesus questions about the law hoping to trick him into saying something that would cause people to turn against him. One day they were questioning Jesus and he answered them with one good answer right after another. One of the teachers of the law was standing there listening to the debate. He realized that Jesus had answered well, so he asked, "Of all the commandments, which is the most important?"

Jesus answered, "The most important commandment is this: 'You must love the Lord your God with all your heart, all your soul, all your mind, and all your strength.' The second is equally important: ‘Love your neighbor as yourself.’ There is no other commandment is greater than these."

After hearing Jesus' answer, no one else dared to ask him any more questions!

What a great answer. If we could just keep those two commandments, we wouldn't have any trouble keeping the rest of them, would we?
Posted by Sermons4Kids at 10:26 AM 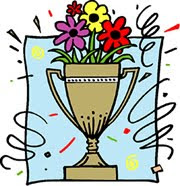 As you know, whenever there is a contest, the person who finishes in first place is awarded a blue ribbon, a gold medal, or perhaps a trophy. It gives you a good feeling to be a winner. After all, you have worked hard and it is nice to hear the applause of others when you are awarded the prize. When someone sees that you have a blue ribbon, a gold medal, or a trophy, they know that you have done something very special.

James and John were two brothers who were disciples of Jesus. They thought that they were deserving of special recognition in the Kingdom of God. Now they knew that Jesus didn't hand out blue ribbons, gold medals, or trophies, so they decided between themselves just what special honor they deserved. They went to speak to Jesus privately. "Teacher," they said, "we want to ask you a favor of you."

"What do you want?" Jesus asked.

They answered, "When you are seated on your glorious throne, we want to sit in places of honor next to you, one on your right and one on your left."

"You don't know what you are asking," Jesus said to them. "Are you willing to suffer as I am going to suffer?"

"You may be able to suffer as I will suffer. But I have no right to say who will sit on my right or my left. God has prepared those places for the ones he has chosen."

No doubt James and John were disappointed by Jesus' answer, and when the other ten disciples heard what James and John had asked, they were furious. After all, they were as deserving of this honor as James and John. Jesus heard their fussing and called all of them together. "You've seen how rulers in this world throw their weight around," he said, "and when someone gets a little power it quickly goes to their head. It's not going to be that way with you. Whoever wants to be a leader among you must become a servant. Whoever wants to be first among you must be the servant of all."

So you see, the Kingdom of God isn't about winning recognition, praise, or a seat of honor. It is about service to others. To see what that means, all you have to do is look at the life that Jesus lived. He came not to be served, but to serve, and he gave his life so that we could have eternal life. Eternal life! Now that is the greatest prize anyone could hope to win.

Father, may we, like Jesus, live a life of service to others as we look forward to claiming our eternal prize.
Posted by Sermons4Kids at 11:33 AM

Take Up Your Cross

we see crosses all around us. People wear them as jewelry, they hang them on the wall, and they use them as key chains. When you pass by a church, it is not unusual to see a cross on the steeple. We even see many people who wear the cross as a tattoo on their body. What comes to your mind when you see a cross? What does the cross mean to you? Is it just a piece of jewelry or a work of art?

One day, as Jesus and his disciples were walking along a road, Jesus asked them, "Who do people say that I am?"

The disciples answered, "Some say John the Baptist or one of the prophets."

Peter answered, "You are the Christ, the Messiah."

Peter had given the right answer. You would think that would be the end of Jesus' lesson, but it wasn't. "Keep it quiet and don't breathe a word of it to anyone," Jesus said, "because it is necessary for me to suffer many terrible things. I will be arrested, tried, and killed, but after three days I will rise again."

Jesus reprimanded Peter, "Get behind me, Satan! You are looking at things from a human point of view, not from God’s."

Then Jesus called the the crowd of people who had gathered around to come and join him and his disciples. "If any of you wants to be my follower, you must turn from your selfish ways, take up your cross, and follow me. If you try to hang on to your life, you will lose it. But if you give up your life for my sake, you will save it."

The cross - it is so much more than a piece of jewelry, a work of art, or a decoration on a steeple. It is a reminder of our Savior's great love for us and our call to follow him!